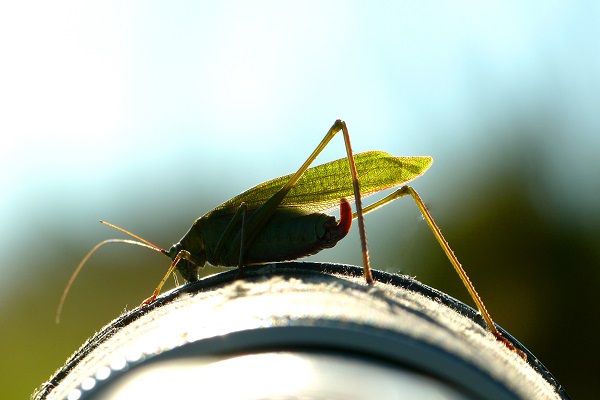 The Common True Katydid – Helping me with my photography last summer.

If I had a blog, today I would write about Pterophylla camellifolia the Common True Katydid. Here in Missouri, summer nights are far from silent. The chorus actually begins in March, with the song of the spring peeper. As the nights warm, they are joined (and eventually replaced by) leopard frogs, Blanchert’s cricket frogs, chorus frogs, grey tree frogs, and bullfrogs. In late April, whippoorwills add their lilting voices, and in June, various forms of cicada join the band. Then, on a sultry night in early July, the last singer comes to center stage. He is dressed in a leaf-shaped suit of emerald green, and though his voice is rough and strident, there is beauty in his love song that rivals the finest aria.

In hopes of attracting his lady-love, the male katydid rubs one forewing against the other, much as a violinist draws a bow across the strings. As the summer progresses, males join forces to compete for mates with neighboring band by synchronizing their songs so they alternate with the vibrato of  their competitors. The loudest band of katydid males gets the most mates, so these competitions produce a powerful, pulsating chorus that puts the rest of the night-singers to shame. 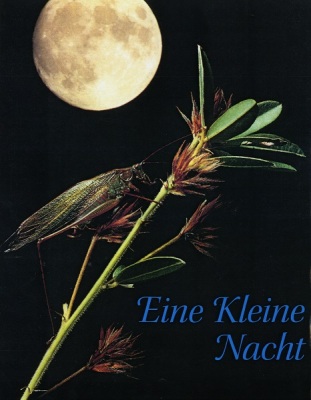 Many years ago, I became intimately acquainted with two katydids named Robin and Dalton. Dad collected these special katys to photograph and sell with an article Mom was writing for Missouri Conservationist. The article was called Eine Kleine Nachtmusik (A Little Night Music). The title is an homage to Mozart’s serenade in G major, but the article focused on a young entomologist with the Nature Conservancy who was studying the songs of katydids and other night insects. Robin and Dalton, were featured in several photographs, then stayed with us until they passed away late in November. Wild katydids die with the first frosts of autumn, but the benefits of indoor living may have given Robin and Dalton bragging rights as the oldest katydids in history.

This  year, the katydids started singing on July 7th.  Mom and I were getting ready for bed and had a feeling it was time to see if our summer friends were tuning up. We went out on the patio and drank in the soft summer twilight. We heard the bullfrogs at the pond and the whirring call of a cicada in the trees. We waited and waited and then we heard them! “Kay-t-t-did! Kay-t-t-did!” echoed from the edge of the woods. It was one male, maybe two – just a warm-up for the hundreds that will serenade us in nights to come.

As fireflies twinkled in the dusk and a gentle breeze danced across the sleeping farm, it occurred to me that though we may dream of exploring other planets and discovering remarkable alien life-forms, we would be hard pressed to find another world as astounding as the one we now inhabit. It makes me think of a quote by naturalist and environmentalist John Muir: 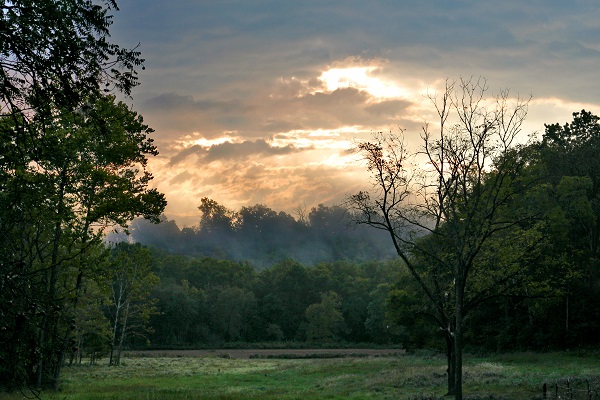 “I used to envy the father of our race, dwelling as he did in contact with the new-made fields and plants of Eden; but I do so no more, because I have discovered that I also live in ‘creation’s dawn.’  The morning stars still sing together, and the world, not yet half-made, becomes more beautiful every day.” 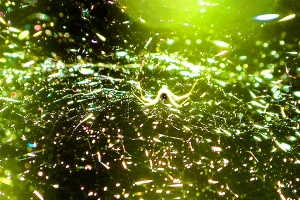