If I had a blog, today I would write about my having the best bad luck in the world. 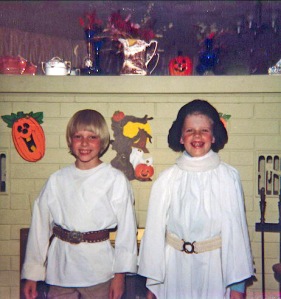 Halloween, the year I was ten.

I used to think I was the unluckiest person in the world. There was some basis for my assumption, after all, my medical record read like (and looked like) a textbook on unusual medical conditions: At age ten I was diagnosed with insulin-dependent diabetes, I had brain surgery when I was sixteen to remove a tumor that destroyed my pituitary gland, found out I have a rare blood-clotting disorder when I was thirty, discovered I have Asperger’s Syndrome in my early forties, and have suffered from migraine headaches for more than a decade. When it was all said and done, I had trouble finding a specialist to help me manage my kaleidoscope of conditions. I was a medical marvel. To say I was angry at God would be the understatement of the century. 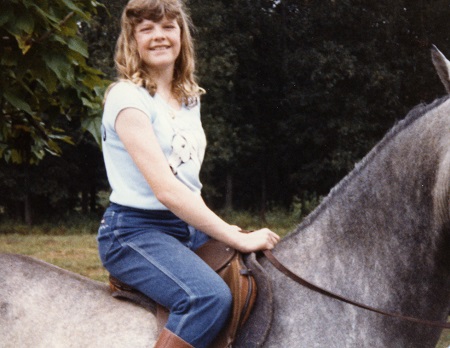 Me and my horse, Jamil, just before my surgery

I wore my anger like a badge for close to thirty years. Counseling helped a little, maturity balanced things here and there, abut I was nearly forty years old before I had my epiphany; before I realized I didn’t have common bad luck, I had the best bad luck of anyone I know.

My lightning flash of insight came one night while I was journaling. I was doing a retrospective of some sort when I saw a pattern emerge in the events which caused me so much angst: Yes, the events were unfortunate and unpleasant and maybe even unfair, but in every case, there were occurrences that were really pretty marvelous. For example, when I was diagnosed with diabetes I knew I would be giving shots of  insulin for the rest of my life, but if I’d been born even fifty years earlier, before insulin was discovered, my prognosis would have been grim. Today, Type 1 Diabetes is not a terminal illness. I could have been diagnosed with cystic fibrosis, cancer, or worse. All in all, if I had to have a serious condition, diabetes wasn’t a bad way to go.

My epiphany expanded when I thought about my brain tumor. Not only was it benign and fully operable, my second cousin, Dr. Don Long, was chief-of-staff of neurosurgery at John’s Hopkins Medical Center, the place where the surgery I needed was developed. Don would perform the surgery alongside the specialist who invented the procedure. Talk about spectacularly good-bad luck!

These realizations began a change in perspective that is the center of my life today. Whatever happens, it is now second-nature for me to look for the good fortune in the bad. Yesterday was a case-in-point: My beloved horse, Rain, turned up lame yesterday morning. Her leg was swollen and hot and she couldn’t put any weight on it at all. My first instinct was panic. It could be blood poisoning, some kind of infection, a fractured bone, or even a snake bite. It was Saturday and although our vet will make weekend house-calls, he isn’t always the vet-on-call. The voices in my head told me I’d have to wait until Monday, then try to get an space in Dr. Berger’s very busy appointment schedule. It could be two or three days before Rain would be seen. At that point, I had a few moments of meltdown behind the barn. Once I’d composed myself, though, I decided to give fate a chance. I called the emergency phone number for the vet clinic and wonder of wonders, not only was Dr. Berger on call, he could come right out. Good Luck Number 1. After a thorough exam, Dr. B diagnosed Rain with a bruised hoof. He gave me a daily regimen of foot-baths, poultices, and bandaging, but he assured me my Rain would make a full recovery.

If I had a dime for every time my brain predicted gloom and doom, then was proved wrong, I would be in the Fortune 500. I don’t know what defense mechanism makes us think assuming the worst is helpful, but it seems to be hardwired into the human genome. The good news is: There seems to be a treatment. Like my diabetes, it is more management than a cure, but approaching the fearful things of life with the intent of finding the best of bad luck does work miracles.

I am a little nervous as I head to the barn this morning. Rain should be better, but the committee in my head say, “No, no, things could have gone downhill over night.” Nevertheless, I will take the high-road and dare to hope for the best, not expect the worst. After all, I want to maintain my title. I want to remain the human with The Best Bad Luck in the world.