If I had a blog, today I would write about my life with wolves. 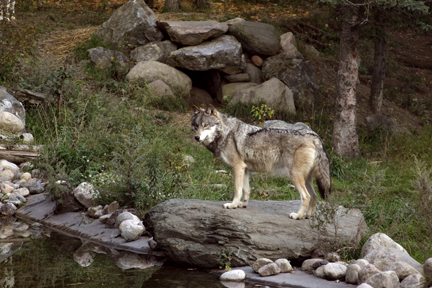 Wolves have been part of my life as long as I can remember. As with many children, thanks to the work of the Brothers Grimm and other authors, I first experienced wolves as villains: Snarling, wicked, green-eyed monsters whose greatest delight was dining on unwary children. Wolves haunted my nightmares and lurked in the shadows of my imagination on camping trips and evening walks in the woods. Fortunately, I had wise parents who saw my distress and quickly intervened. Red Riding Hood and the Three Little Pigs were boxed up for good and out came National Wildlife magazine. In those glossy pages, Mom and Dad read to me stories of an animal that mates for life, loves its children, and fears humans far more than we fear its undeserved reputation. I also learned that humans, not wolves, were the murderous, nightmare beings that nearly wiped the species off the map. I wept for the needless loss of life, the brutal destruction of a breathtaking creature. Within a few weeks, I went from frightened child to junior wolf-activist and my dedication to assuring the survival of the wolf has never waned.

In college, I discovered my version of Mecca: The International Wolf Center in Ely, Minnesota. It was then that I set my sights on visiting Ely and seeing a landscape where wolves had been allowed to flourish. I knew the experience would be one to remember, but I had no idea what lay in store.

This evening we attended a program at the Wolf Center. They feed the wolves once a week, to mimic their natural eating patterns, and to give visitors a chance to see the wolves interact at close range. 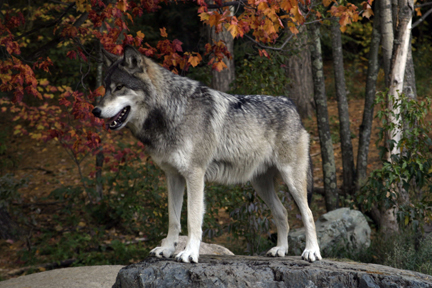 We arrived early and spent almost half-an-hour alone watching the wolves before the other visitors arrived. I have been around many types of animals in my life, but none humble me like the wolf. In their presence, I am compelled to kneel in reverence and awe. Sitting in the viewing window, Maya, one of the Great Plains Grey Wolves, came up close to see what was going on. Her face was inches from mine and she held my gaze for a long time. My heart was racing, but this time, not from fear. In the quiet of that autumn evening, I found myself in the presence of The Gods; beings far older and wiser in spirit than any human has ever been. I was being weighed and measured by this beautiful creature and I prayed I would not be found wanting.

I felt a catch in my throat as I thought of the litany of sins my species has committed against the wolf and I said a silent confession, reciting a poem written by O. Fred Donaldson:

Grey Wolf,
We are sending you to that Great God.
Tell Him that we who invented forgiveness do not forgive;
That we, who speak of trust cannot trust;
That we, who invoke faith would not believe.

I write as though you could read.
But I know you understand.
When you have left the forests and tundras
and no longer leave your sinewy trails within the snows,
Tell Him that you were made on a different day.

Your howls of bewilderment will echo
with the mountain winds.
And your songs will join those of the whales.
Tell Him for me,
“Forgive them Father for they know not what they do.”

I do not know what conclusions the wolves came to in our brief encounter. Perhaps I was no more than a shadow on the other side of the glass, a likeness of those who haunt their nightmares and lurk in the shadows of the forest as a spectre of doom. If so, I would not blame them. My only hope lies in knowing their spirit is unfettered by the ego-driven concerns of humanity and perhaps that gives them the wisdom to know not all humans are alike. I hope they can sense the spirit of those, like me, who see them as the miraculous creatures they are, who know that in their company, we stand in the presence of The Gods.