If I had a blog, today I would write about my secret love affair with arctic cold.

A Parhelic Circle that formed around the sun on our coldest day of 2014.

“Time for the weather report: It’s cold out, folks, bone-crushing cold. The kind of cold that’ll wrench the spirit out of a young man or forge it into steel.” On this ten-degree morning with 30 mph winds screaming through the tree tops, the forecast given by Chris-in-the-Morning on Northern Exposure fits the prediction for The Greenwood on this polar January day. While most people are running from shelter to shelter, heads bowed and bodies tensed against winter’s return, I have to admit, I revel in the cold. Whatever my bloodlines, somewhere in my DNA is the code for Eskimo, Laplander, or Sherpa – a string of the genome that makes me feel centered, even euphoric, when I face chores on a day like today.

Me in my Up North gear.

Part of my love for les temps froids is simply that I thrive in the cold and wilt in the heat. My inner furnace keeps me warm regardless of the wind chill, but apparently I have no internal cooling system and summer heat sends me to the mat. But that’s just a small part of the story – a story that begins in 1990, with the advent of a television show called Northern Exposure. I was in college, living alone for the first time and searching for an identity that fit my solitary, wilderness-loving nature. When I saw Northern Exposure, a critical piece of my inner puzzle fell into place telling me The North was the place for me. Not only did pointing my compass in that direction lead me to my own version of Cicely, a little town called Ely in Northern Minnesota, it also introduced me to the fascinating world of dogsled racing – the world of The Beargrease, the Yukon Quest and The Iditarod.

Overall, I have no interest in professional sports, but when the dogsled racing season begins, I’m as rabid as a fan can be. I have no idea who won last year’s World Series, but I can tell you who’s won last year’s races, their finish times, how many dogs they used, and what strategies they employed to beat their competitors. I follow The Iditarod online and often stay up well past midnight to watch the winner pull under the burled arches at the finish line in Nome. Watching the men and women who spend ten days travelling day and night through treacherous landscapes and bone-chilling cold, I am filled with admiration – and, in my younger years, a dream of running dogs myself. 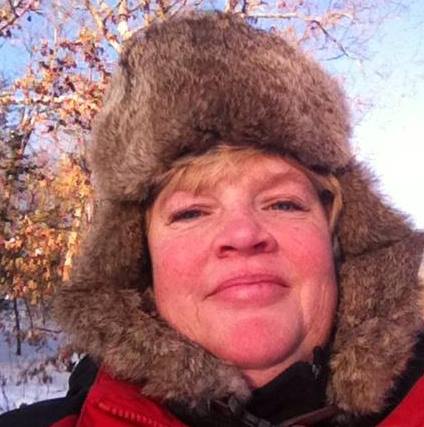 Now that I am now well into my forties, and deeply invested in my life here in Missouri, I imagine my Iditarod dreams will stay just that. Though I may never have the experience of crossing Rainy Pass in the Alaska Range or running down the frozen Yukon River at -40 degrees, I can still get my fix when the polar vortex comes to call. Then, standing on the rise beyond the barn, with snow swirling around me and the wind ruffling the rabbit-fur lining of my hat, I know for just a moment what it feels like to face True North, what it feels like to come home.