If I had a blog, today I would write about dinosaurs. I am currently reading a book called, “My Beloved Brontosaurus,” by Brian Switek. The author takes my dream trip around the world, visiting the sites where the most significant dinosaur discoveries were made, bringing us amateur paleontologists up to date on the latest finds. Sadly, to both myself and the author, Brontosaurus no longer exists. He has been reclassified as Apatosaurus, but I have to say, I love him still. It has been forty-plus years since I first entered the world of the “Thunder Lizard” and I find creatures prehistoric as fascinating today as I did back then.

Dinosaurs were my first true love. From the age of four, I was captivated by these ancient giants and, as always, I dove into my idée fixe  with heart and soul. My parents were more than supportive and I remember with great clarity my favorite dino toy: A Jurassic landscape, complete with plastic cliffs, swamp, and a multitude of plastic dinosaurs. Despite the fact that my diorama included cave-men, a fact that made me very upset, I spent hours arranging my Brontosaurus, T-Rex, stegosaurus, dimetradon, triceratops, pterodactyl, and other favorites as they went about their life of hunting and being hunted. Everyone in the family knew about my obsession, but they only asked once what my career path would be.

“So you’re going to be an archaeologist?” a well-meaning relative would ask.

“No,” I would reply, with four-year-old indignation, “I am going to be a paleontologist. It’s quite different you know.” Enough said.

Down the years, my plans changed and I graduated college with a degree of psychology instead of paleontology. But nonetheless, my interest in dinosaurs remained. When my parents bought our farm on the Little Piney River, I did my research and found that the Missouri Ozarks is still rich in prehistoric remains. This part of the country was once an inland sea and rocks found in our creeks and rivers contain fossils of the ancient creatures who inhabited the watery world. After the seas receded and the ice-age ended, central Missouri was home to many prehistoric mammals: Horses, mammoths, great bears, and even sloths roamed field and forest. During the Middle and Late Woodland Periods (500-1000 CE), nomadic peoples roamed this area, subsisting as hunter-gatherers, making their temporary homes in the caves and limestone overhangs that are common in this area.

With loupes and geology picks in hand, Mom and I began searching for fossils along our stretch of the river. We may not have discovered a new species of dinosaur, but our efforts were soon rewarded. At first we found a multitude of fossils from small sea creatures called crinoids and snail-like mollusks called ammonites, which dwelt here more than 60 million years ago. My best find is the fossilized tooth of a paleo-horse, dated at over 2-million years old. Mom and I were thrilled at our discoveries, small as they were. Then we found the cave. 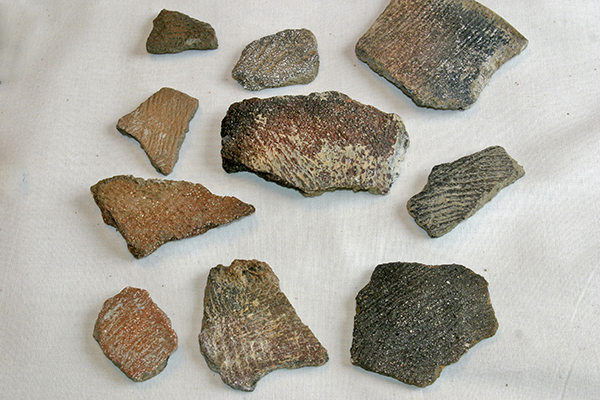 Up above our river is a small limestone overhang, typical of the kind used by the Woodland Indians. We checked with the USGS and found that the overhang had been excavated by the University of Missouri in the 1970s and pottery and other artifacts had been found. Now that the dig was complete, we were welcome to explore the area and keep any minor artifacts we might find – and find we did!

The cave, which we christened “Old Woman Cave” is a challenge to reach. We could only get through the underbrush in winter and even then the amount of bushwhacking needed was considerable. After climbing the near-vertical face of the hill in which the cave lies, we reached the entrance. The open area goes back about 50 yards, then constricts to a tunnel about 4′ in diameter. Since Mom and I are not spelunkers, we limited ourselves to the large part of the cave, but that was more than enough. We spent hours sitting in the fine, sandy soil of the cave floor, sifting through time. We found several nice shards of cord-marked pottery, deer bones and teeth, and river mollusk shells used as decoration. It was the experience of a lifetime.

Sitting in the silent darkness, I felt as though I had found a “thin place,” a place where planes of reality intersect and time becomes irrelevant. Holding a shard of pottery in my hand, I could feel the spirit of the women who created and used this pottery more than 1000 years ago. From their hand to mine, a gift across the millenia. I promised those spirits I would protect and honor their work and, one day, hand it on to another woman so she could tell the story of its making and of its journey through the ages.

In my recent search for fossils, I discovered my passion has more to do with connections than with fame or fortune. Of course, it would be great to discover an entirely new species of prehistoric beast or find a complete mammoth skeleton in our cave, but more than that I love the feeling of universal oneness I have when I touch an artifact so old. It is like weaving together the strands of time, making me part of a tapestry that exists outside of time, where all things truly are connected. 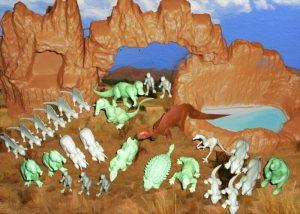 My Own Jurassic Park

Once I began my new quest for ancient artifacts, my beloved dinorama came to mind at once. I knew it had not survived my childhood – played with until it fell to pieces – and I wished I could see it one more time. I knew it was a reach, but I plumbed the depths of eBay and one bright morning, I found it: A “Like New” incarnation of my favorite toy. I purchased it at once and the day it arrived I set it up in my bedroom and the years melted away until I was a four-year old with a Brontosaurus once again. All these ventures have brought me to the conclusion that Time is really just a human convention. We may not be able to go back to a moment and change our fate or jump ahead and alter the future, but the artifacts we collect and leave behind to be rediscovered give us a way to transcend the present and, for a moment, find our Universal past.

T.S. Eliot said it best when he wrote:

“We shall not cease from exploring, and the end of our exploring will be to arrive where we started and know the place for the first time.”